What is ‘vastu shastra’?

The earth is the element that exudes maximum energy. Hence, vastu experts claim that it is important to consult before purchasing a piece of land. It requires inspection of soil, the shape and size of the land among other things before a vastu expert can tell if the land is auspicious or not.

The second element, water, is present in enormous amounts on earth. According to vastu shastra, proper placement of water sources is important. It is said that water should be kept in north-east as it is considered good for the health of the family. Due to this, vastu compliant houses will have drinking water taps, swimming pools and water tanks in the north-east direction.

The third element is fire. It is considered to be an element for the south-east direction as it brings harmony in relationships. Hence all fire-related equipment like the gas stove or the electrical gadgets like microwave oven etc. should be kept in the south-east direction. Similarly, the sun is the most primal source of light energy. It is suggested that there should proper windows and ventilation in a house for sunlight to come in.

The fourth element is air. It is because of air or oxygen that living beings can breathe and survive. In addition to oxygen, air also consists of carbon dioxide and nitrogen which is important for plant life. In this way, air is a must for any human, animal or plant to survive on earth. It is considered to be an element belonging to the north-west direction. Placing your windows in this direction will make it possible to bring in fresh air. This also explains why vastu shastra gives importance to proper ventilation outlets in a house.

The fifth and final element is space. The atmosphere, the sky, the stars, planets all constitute the space around us. Vastu considers the space around us to be very critical to our being and therefore it is suggested to have some space in the centre of the house. In fact, all traditional Indian houses or public utility places consisted of a courtyard. 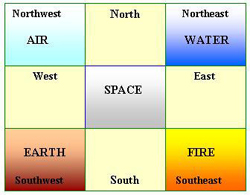 Directions and Their Relevance in ‘Vastu Shastra’

It is traditionally considered to be a bad direction, but since it is a bank or storage of all good energy coming in from north, hence, south should be kept closed in order to bring prosperity. The God of this direction is ‘Yam’ or the God of death. The planet ruling it is Mars.

This direction represents power and the God of this direction is Lord Indra. It is ruled by the powerful Sun. Since Sun is responsible for giving energy for life to grow on earth, this direction is also a direction of growth. Hence, it should be kept clean and open to avoid stagnation.

West is the direction for stability. It is ruled by Lord Varun, the God of rains and fate. The ruling planet of West is Saturn. Since it is related to rains, it is advisable to avoid light and openings in this area.

Ruled by the Lord of air – Vayu dev, this direction is powered by wind. The planet Moon rules this direction and hence north-west is an unstable direction which can create great opportunities if used wisely and vice-versa.

This direction is ruled by Agni dev, ruler of Fire and the planet representing it is Shukra or Venus. This direction is dedicated to works related to fire like cooking and placing electrical equipment like generators, refrigerators, boilers etc.

Ruled by the demon Niriti, this direction is ruled by Rahu which is a shadow planet as per vedic astrology (Rahu and Ketu shadow planets are points of intersection of the paths of the Sun and the Moon as they travel). It is the strongest direction and shows the strong magnetic energies flowing in from the north-east direction. It can bring prosperity, health and confidence to the resident of the house when it is used correctly. Hence there should be a structure of high altitude in the house in the south-west direction.

This direction is also known as sky or ‘urdhwa’ meaning skywards. It is divided into 7 parts on the basis of height.

This direction is also known as ‘adharasta’ meaning downwards. It is divided into 7 parts depending on the depth.

Directions are the heart and soul of vastu shastra. By following the rules of direction, energy flow of a house can be maintained for optimum harmony.